Below you will find programs, reports and summaries of activities and organisations were Robert Klijn is or has been involved with.

On October 10, 2019 CFA Society VBA Netherlands published a flyer to support their conference Impact investing: how money can do good instead of less harm in Amsterdam.

Because of Earth Overshoot Day on 29 July 2019 Robert was interviewed by the prime news channel Radio 1 Journaal and the popular channel Radio 538. Online articles (in Dutch) were published by the editors of NOS, RTLZ and De Morgen.

Peaks published on December 28, 2018 an article (in Dutch) on the basis of an interview with Robert Klijn and Sietske van der Veen.

IEX Profs published on October 15, 2018 an article (in Dutch) on the basis of an interview with Robert.

The Dutch Financial Daily published on May 15, 2018 a supplement with an article on the basis of an interview with Robert. 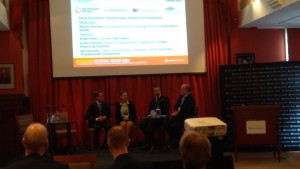 November 1, 2017 Robert was a member of the panel about Practical Steps Towards ESG Integration of the Markets Group event Netherlands Institutional Forum.

Financial Investigator published in May 2017 a column (in Dutch) by Robert about the real change that investors are able to realise by investing for example in green bonds.

On March 23, 2017 was Robert was organiser and host of the CFA-VBA conference ESG – Green bonds: Principles put into practice – finding out what matters in Amsterdam. 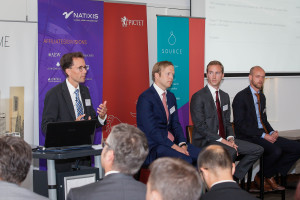 The complexity of ESG integration in the investment process

IEXProfs published in October 2016 an article titled Investors want impact (in Dutch, p.7) after an interview with Robert following a questionnaire held among visitors of the panel discussion about the complexity of ESG integration in the investment process on September 20 in Amsterdam. Robert was moderator during the Alpha Research seminar Is your investment policy Draghi Proof?

On April 8, 2016 was Robert was organiser and host of the VBA conference Verantwoord Beleggen in de praktijk in Amsterdam. The VBA Journaal published an article about the conference.

On September 8, 2015 Principles for Responsible Investment and the Sustainable Stock Exchanges were welcomed at the opening of the London Stock Exchange. Robert was also a guest.

On June 26, 2015 Robert was organiser and host of the conference by VBA and VBDO Bedrijf en Pensioenfonds: Chinese muur of heilige twee-eenheid? Pensioen Pro published on June 29 the article Philips-fonds geeft voorkeur aan stille engagement after the conference.

On May 8, 2015 Robert gave an interview for Borsa Istanbul about the renewable sector in Turkey after the conference of the Centre for Energy and Value Issues (CEVI). On September 22, 2015 CEVI published the article Sustainable Stock Exchanges that Marcel Schulze and Robert presented at the CEVI conference. The network for Sustainable Financial Markets published a summary of the SFM/VBDO meeting on leadership on March 18, 2015. Robert was one of the participants. 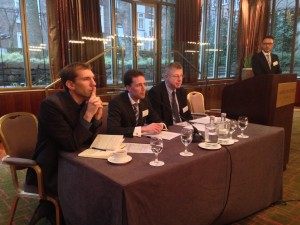 On February 12, 2015 Robert was interviewed after being a panel member during the sustainable investment day organised by Singularis Advisors in Amsterdam.

As co-author Robert offered om December 1, 2014 the whitepaper Breaking Financial Barriers at the Ministery of Economic Affairs to Director Enterpreneurship Pieter Waasdorp. A press release and articles in Fammbizz, the financial daily newspaper FD and on the web site of Consultancy.nl were published as well.

Op November 3, 2014 Robert organised the VBA meeting (in Dutch) Responsible Investing: the next step! in the Rosarium in Amsterdam.

Robert was involved in the event organisation of Alpha from Sustainability: Applying best practice to valuation on October 7, 2014. His interview with SRI-CONNECT was a resource.

On September 24, 2014 Robert was member of a panel about Integrated Reporting at the Pan-European IR Conference in Brussels.

Financial Investigator published in September 2014 a column (in Dutch) by Robert about the relationship between innovation and sustainability.

The VBA Journal published Robert’s impression (in Dutch) of the VBA event about Responsible Investment in Private Equity and an article (in Dutch) about the change of name of the VBA committee responsible investing in September 2014.

SRI-CONNECT published an interview with Robert on August 26, 2014.

On 18 July, 2014, Sander Quak, Johan Heilbron and Jessica Meijer published the article ‘The rise and spread of sustainable investing in the Netherlands’ in the Journal of Sustainable Finance & Investment. Robert was interviewed. 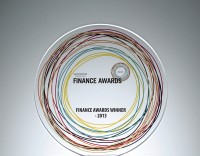 November 20, 2013, Aquisition International announced that Fair Impact has been rewarded with the title ESG Consultancy of the Year – Netherlands.

November 19, 2013, npn published (in Dutch) an article about the round table discussion with the title ESG integrates within the investment policy.

IR Magazine published on her website an interview with Robert and others about Corporate Access on October 23, 2013.

On September 19, 2013 Robert was host during the VBA-EFFAS ESG seminar on active versus passive sustainable investing in the Rosarium in Amsterdam (background speakers). Fondsnieuws.nl published on July 10, 2013 a contribution (in Dutch) from Alpha Research with the title Good opportunities sustainable investments in convertibles. Robert explained the sustainability investment trends.

On June 27, 2013 Robert was a panel member at the Pan-European IR Conference at NYSE Euronext in Brussels.

SRI-CONNECT published on her website the blogpost Postcard from SRI in Switzerland – where the money is on May 30, 2013.

On April 12, 2013 Robert was the host during the VBA seminar From bombs to fur – moving limits? (in Dutch) in the auditorium of Symphony, Gustav Mahlerplein 113-115 in Amsterdam. 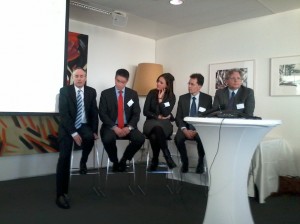 On March 12, 2013 Robert presented at the VBDO Analyst Network event about AkzoNobel. He also participated in the panel discussion.

On February 21, 2013 Robert will be one of the hosts during the event of the Dutch Association of Investment Professionals VBA Integrated Reporting has the future! (in Dutch) at Rosarium, Amstelpark 1 in Amsterdam.

On December 18, 2012 Robert gave a guest lecture at the University of Groningen for the course of study of Sustainable Investing and Finance under the management of Prof. dr. L.J.R. (Bert) Scholtens, Director Energy and Sustainability Centre of the Faculty of Economics and Business. The theme was the value of sustainability ratings.

In the Autumn edition of SPO magazine Spotlight on pages 18 and 19 an interview (in Dutch) with Robert is published as Chair of the Committee Sustainable Investments of the VBA.

On July 27, 2012 NPN, Dutch Pension & Investment News, quoted Robert in an article (in Dutch) with the title Commodities investors in search of ethical proof.

On May 11, 2012 Robert was one of the hosts during the event of the Dutch Association of Investment Professionals VBA Duurzaamheid en vastrentende waarden: sustainable duration? at Rosarium, Amstelpark 1 in Amsterdam. 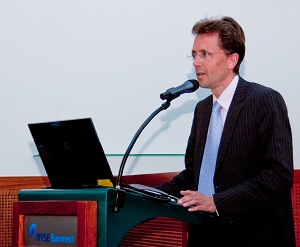 On April 12, 2012 Robert was the host during the VBA seminar Principles for Responsible Investments: essential for investors at Euronext, Beursplein 5 in Amsterdam.

In the first issue of RepRisk Insight of March 2012 an interview with Robert was published about the Lessons learnt from BP’s Gulf of Mexico oil spill.

On December 14, 2011, Robert participated in advisory meetings for companies during the Rabobank International ‘Made in Benelux’ SRI Investor Conference 2011.

On September 18, 2011, the website of the VBA published an interview (in Dutch) with Robert on his investment beliefs.

On May 18, 2011 Robert was a Devil’s Advocate during the Institutional Investor Emerging Markets Investment Summit in the Hilton Hotel in Amsterdam.

On March 10, 2011, Robert was a panelist during the Institutional Investor seminar Rights and Responsibilities of Institutional Investors in the Renaissance Hotel in Amsterdam. His session was called “What Can We Learn from the BP Disaster?” A summary is published on the website of RepRisk.

In December 2010 RepRisk published the report Most Environmentally and Socially Controversial Companies in the year 2010. Major business newspapers covered the report.

Financial Investigator published an interview (in Dutch) with Robert following the launch of Fair Impact in 2010.

The German sister organisation of the VBA, DVFA, and the European mother organisation EFFAS published in 2010 the third version of their report on Key Performance Indicators for ESG and CSR reporting. Robert helped compiling the first version.

In 2009 Robert was co-organiser of and participant in a round table meeting on soft commodities. The VBA journal published a report in the first issue of 2010 (in Dutch).

In 2008 Robert chaired a round table meeting on sustainable investment. The results are published in the first 2009 edition of Financial Investigator (in Dutch).